Discussions of generations – or more particularly how members of one generation can relate to members of another generation – dominate discussions of how businesses operate,[1] jury selection,[2] and even familial relations.[3]  Famed German sociologist Karl Mannheim published Das Problem Der Generationen (translated as “The Problem of Generations”) in 1928.  Mannheim’s central thesis is that generations have similar formative experiences in their youth that unite people across gender, class, race, or other classifications to have a shared, common experience.[4]

Your author is a member of Generation X, which is generally accepted to be those persons born between 1965 and 1980.[5]    My generation, for the most part, got their first email address in college, repurposed AOL CD-Roms into beverage coasters, used rotary phones to call people, was possibly unable to leave a message if someone wasn’t home, couldn’t take pictures or send messages on their phone, and, among other things, saw the rise of home video games slowly kill the oasis of entertainment and escapism known as the video arcade.

One of the defining musical voices of Gen X was Eddie Van Halen, who died on Tuesday, October 6, 2020 at the age of 65 from cancer.  Known best for his eponymous band and transcendent guitar playing talent, Eddie Van Halen’s music served as the soundtrack for many a Gen Xer’s life experiences.  I am a Van Halen fan, as I was mesmerized in my youth watching the group’s videos on MTV (back when MTV showed music videos).

So what the heck does Van Halen have to do with Admiralty law?

Quite a bit, actually, if you are familiar with a bit of urban legend surrounding the band from back in its heyday.  When a band of any renown books a venue, the venue has a standard, form contract it customarily presents to the artist(s).  Van Halen was famous (or infamous) for their contract rider, which would amend this standard contract.  Indeed, the Van Halen Rider is often used as an example of the excess of 80’s rock bands.  Among other things, it required, as cold drinks for the Band (four men – David Lee Roth, Eddie Van Halen, Alex Van Halen, and Michael Anthony), the following:[6] 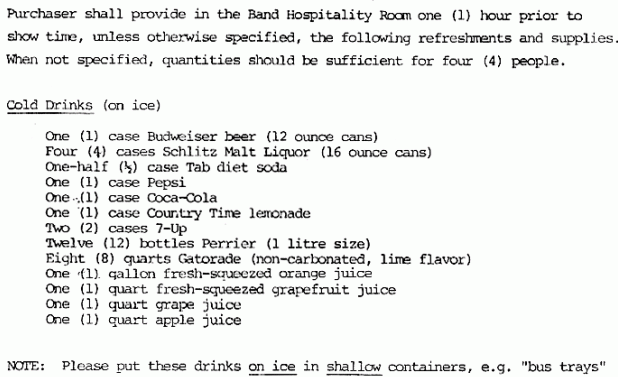 In addition to enough adult beverages to fuel a small fraternity party, Van Halen’s rider also contained a demand for munchies in their dressing room, which included:[7]

Why did Van Halen ask for brown M&M’s to be picked out of the candy bowl?  Van Halen was known for their over-the-top shows that had massive light and sound displays different from that of most touring rock acts in the early to mid 1980s.  Van Halen lead singer David Lee Roth explained in 2012 the thinking behind the clause, since the contract rider also provided all the technical specifications (electrical, stage support, etc.) when he said:[8]

“If I came backstage, having been one of the architects of this lighting and staging design, and I saw Brown M&Ms on the catering table, then guaranteed the promoter had not read the contract rider and we had to do a serious line check.  Frequently we had danger issues or accidental issues.”[9]

Roth also recounted a time when Van Halen played a show in New Mexico in an arena with a new rubber floor, and “the promoter had not read all of the physical requirements of the contract, and our super heavy stage sank about 6 ½ inches into their brand new rubberized floor.  Backstage, not knowing this, I walked in and saw Brown M&Ms, so I trashed the dressing room a little bit.”[10] Roth said the trashing of the dressing room was a few hundred dollars, but the floor damage was over $400,000.00.[11]

So, what does the Brown M&M clause tell people who draft/read/enter into contracts?  Attention to detail matters, and little errors could be the sign of a larger problem.

An oft-litigated litigated issue is the enforceability of indemnity provisions in maritime contracts.  The General Maritime Law allows parties to enter into defense and indemnity agreements in a contract,[13] provided such agreements satisfy the express negligence test and are otherwise conspicuous in the contract.[14]  In contrast, Texas law, particularly those laws related to offshore drilling (and related services) prohibits indemnity clauses for certain types of oilfield activities under the Texas Oilfield Anti-Indemnity Act (“TAOIA”).[15]  Unless there is a mutual mistake,[16] the contract is going to be the operative agreement.

What seems like a small detail (the scope of work description, the choice of law clause) can, like the presence of a Brown M&M backstage at a Van Halen concert, be an indicator of a much larger problem in the proposed agreement.  Thus, it may be best to act like Van Halen and trash a dressing room in the negotiation stages so as to avoid a stage collapse (or some similar maritime equivalent) during the actual “concert” constituting the work under the maritime contract.

Always be looking for Brown M&Ms, and not necessarily to eat them.  And, rest in peace, Eddie. 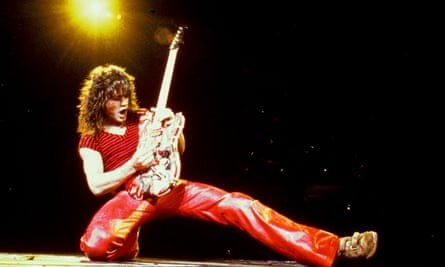 [9] The full story from David Lee Roth can be seen here: https://www.youtube.com/watch?v=_IxqdAgNJck

[16] Which both the GML and Texas/Louisiana law allow to be reformed in equity through introduction of parol evidence outside the contract, as described in Richard v. Anadarko Petroleum Corp., 850 F.3d 701 (5th Cir. 2016).