Any child of the 80s (or really, anyone with taste) recalls such cinematic masterpieces as Raiders of the Lost Ark, Back to the Future, The Karate Kid, or Breakin’, which constitutes the movie debut of not only Jean Claude Van Damme (albeit in an uncredited role) as a bystander at an outdoor “dance-off,” but also Ice-T. 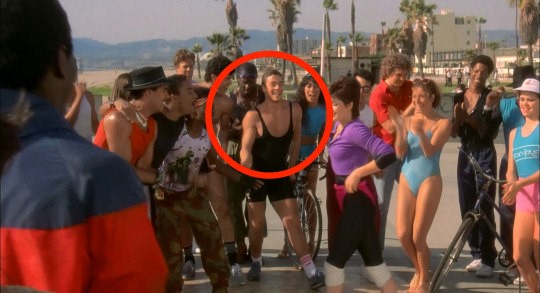 This was some of JCVD’s finest acting.

Each of those movies followed a basic plot: main protagonist unites with friends, learns of problem, experiences adversity, overcomes adversity, and ultimately prevails.  Realizing the financial success of the original, the movie studios subsequently repeated the plot in sequels: Indiana Jones and the Temple of Doom; Indiana Jones and the Last Crusade; Back to the Future II and III; Karate Kid II and III …  and Breakin’ II: Electric Boogaloo – which did include Ice-T but not Jean Claude Van Damme.

The Empire destroys the Rebel base on the frozen planet of Hoth.  Han Solo’s friend Lando Calrissian betrays Solo, who is then frozen in carbonite, and thereafter kidnapped by a bounty hunter, Boba Fett.  Luke Skywalker gets his hand chopped off by Darth Vader, who then reveals his true identity to Luke.  Same characters … vastly different story and result.

Fredieu, among other things, presents the legal lens through which any arguments of a borrowed employee/servant under the Longshore & Harbor Workers Compensation Act (“LHWCA”) would occur in Texas State Courts.[5]  The endgame wasWesley Fredieu was not a borrowed employee under the LHWCA, meaning he could recover against W&T and his $1,900,000.00 verdict at trial stood.

Stevenson is essentially the Empire Strikes Back to Fredieu’s Star Wars.  It deals with a similar set of facts and issues.  Justice Blacklock authored both Fredieu and Stevenson. Both involve the exclusive remedy provisions of worker’s compensation acts; Stevenson with the Texas Worker’s Compensation Act (“TWCA”).

But, the result is drastically different in Stevenson.  Let’s see why.

Taylor Smith Consulting, LLC (“TSC”) hired Robert Stevenson and assigned him to work for Waste Management of Texas (“WM”).[6]  After the assignment, WM assigned Stevenson to work on one of WM’s garbage trucks.[7]  While working on the truck, a WM employee, driver Rigoberto Zelaya, backed the truck up over Stevenson’s right food and leg.[8]  A Master Service Agreement (“MSA”) existed between TSC and WM.[9]  TSC assigned Stevenson to work for WM under that MSA, which declared that workers like Stevenson

Stevenson sued WM for negligence.  In his deposition, Stevenson testified:

The owner of TSC testified that once the worker went to WM, TSC did not tell the worker what to do or how to do it; that fell to WM.[12]

A three-judge panel[13] of the Fourteenth Court of Appeals reversed the trial court in an opinion issued on February 21, 2019.[14]  Therein the Court of Appeals reversed the trial court and found that the record contained a fact issue precluding summary judgment for either party.  In particular, the Court of Appeals found the language of the MSA quoted above, combined with the fact that the MSA did not define “independent contractor” or “employee,” indicated intent of TSC and WM that TSC’s employees would not be WM’s employees.[15]  The Court stated:

Though the contract does not contain a statement that Waste Management lacks the right to control the details and methods of operation of Stevenson’s work, the parties unambiguously agreed that the personnel Taylor Smit supplied would serve as independent contractors in respect of Waste Management and would not be Waste Management employees.[16]

To the Court of Appeals, this contractual language, coupled with the fact testimony of Stevenson and other WM employees, where WM told Stevenson what to do but Stevenson had some freedom in his day-to-day activities, meant fact issues existed.[17]

The Supreme Court Decision in Stevenson

At bottom, the Supreme Court of Texas agreed with the trial court and disagreed with the Fourteenth Court of Appeals: summary judgment for WM was appropriate on the facts of the case.[18]  The “why” of the decision, as I read it, is significant on two grounds.

(1) it was a subterfuge, (2) it was modified by later agreement, or (3) the exercise of control was “so pronounced” and “so persistent” as to raise an inference that the parties acquiesced in the principal’s right to control the details of the work.[20]

The Supreme Court disagreed that the Love holding, which the Court left undisturbed, allowed the MSA language to create a fact issue.  Instead, the Surpeme Court held the facts of Stevenson’s case on the record before them fit into the third exception of Love,[21] and, more importantly, that the existence of a contractual phrase/clause like that between WM and TSC did not automatically create a fact issue precluding summary judgment.[22]

Second, the amount, degree, and quality of evidence of control matters both as “a general matter and in the specific circumstances” of the accident at issue.[23]  But, as noted below, a fact issue could not exist simply because the dual employee retained some autonomy in how to do their job.[24]

Third, the Stevenson Court noted the Supreme Court, over its history, normally construes the TWCA in a liberal fashion, favoring coverage of workers by the statute.[25]  The Stevenson court reasoned that a contract to which the worker at issue was not a party should not limit coverage of a worker by the TWCA in light of this liberal standard of inclusion of claims within the TWCA.[26]

With those three analytical points reached, the conclusion in Stevenson, as Darth Vader said in Empire Strikes Back is “all too easy.” Stevenson was a dual employee, the TWCA served as his exclusive remedy, and the trial court’s decision to grant WM’s motion for summary judgment was legally and factually correct.

-2-       Under Stevenson, what happens on the ground (i.e., at the jobsite) matters more than what is in the contract.  To paraphrase General George S. Patton, good facts of control can save a case even in the fact of the worst contractual language.  Bad facts of control will destroy even the best-worded contract.

-3-       One of the key holdings of Stevenson with respect to summary judgments filed by prospective dual employers is this passage:

But employer status does not depend on whether the employer physically controls every action of the employee.  Every employee is to some extent self-directed in the physical carrying out of his daily work.  This limited sphere of personal autonomy does not mean that the worker has no employer under the Workers’ Compensation Act.[27]

A well-crafted Reply to a Response to a Motion for Summary Judgment on a dual-employer/borrowed servant issue would be wise, in my opinion, to cite to this passage.  The effect of this holding could be a separation of the wheat and chaff in terms of the summary judgment evidence presented by the parties that could create a fact issue so as to preclude summary judgment for one or both parties in the future.

-4-       Factual development matters in these types of cases.  If a summary judgment is pursued, it can only likely be after extensive fact witness depositions.

[1] In my opinion, Empire is the best Star Wars film.