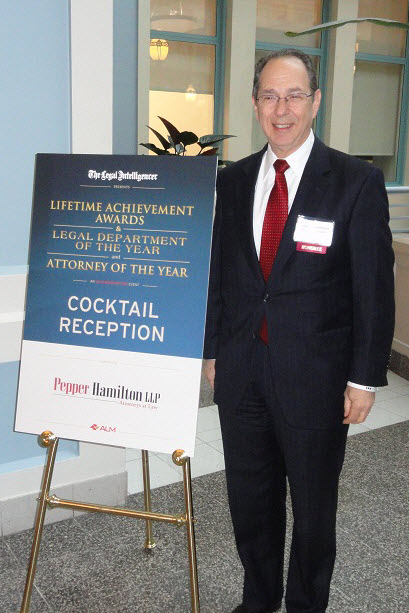 PHILADELPHIA (June 2014) – The Philadelphia office of Chamberlain, Hrdlicka, White, Williams & Aughtry is proud to announce that shareholder Stewart M. Weintraub has been honored with a Lifetime Achievement Award from The Legal Intelligencer, a publication of ALM Media. Presented at a celebratory dinner on May 29, 2014, the award honors a select number of Pennsylvania’s most influential lawyers and jurists.

The Legal Intelligencer selected individuals who have helped to shape the law in Pennsylvania, whether through their work on the bench, their prowess in a courtroom or their dedication to assisting those in need of legal services. The attorney must have had a distinct impact on the legal profession in the state and must still be practicing law.

A well-known and respected state and local tax attorney, Weintraub has been a leader in both the Pennsylvania and the national legal community for more than 40 years.

“I want to thank The Legal Intelligencer and ALM for this recognition,” Weintraub said. “I could not do what I do without the help and support of my family and my firm. I am honored that one of the legal community’s leading publications believes the work I do day to day is considered so meritorious that it should be recognized.”