Tax practitioners have previously lacked a dedicated resource to call their own. For those intrepid souls, we offer TaxBlawg, a forum of tax talk for tax pros.

The Moment of Truth: Is Tax Reform Coming?
Posted December 2, 2010 by Jonathan Prokup

Recalling one of our first blawg posts, the topic of tax reform could be described in much the same terms as the codification of economic substance (prior to its codification, anyway): "a cousin of Bigfoot and the Loch Ness Monster – often spotted, but never confirmed."  Reform commissions come and go with nearly every presidential administration, and the current one is no exception.

The National Commission on Fiscal Responsibility and Reform has released its much-anticipated report proposing reforms intended to closing the yawning federal budget deficit.  The report, titled "The Moment of Truth," makes a variety of proposals, including a number of reforms to individual and corporate tax provisions.

The reform proposals for the corporate income tax are, according to the report, driven by a concern about the competitiveness of American businesses:

The corporate income tax, meanwhile, hurts America’s ability to compete. On the one hand, statutory rates in the U.S. are significantly higher than the average for industrialized countries (even as revenue collection is low), and our method of taxing foreign income is outside the norm. The U.S. is one of the only industrialized countries with a hybrid system of taxing active foreign-source income. The current system puts U.S. corporations at a competitive disadvantage against their foreign competitors. A territorial tax system should be adopted to help put the U.S. system in line with other countries, leveling the playing field.

In furtherance of its goals, the Commission proposes the following changes:

The Commission offered the following chart as an illustration of how the corporate tax provisions would look under its proposal (click on the image for a larger view): 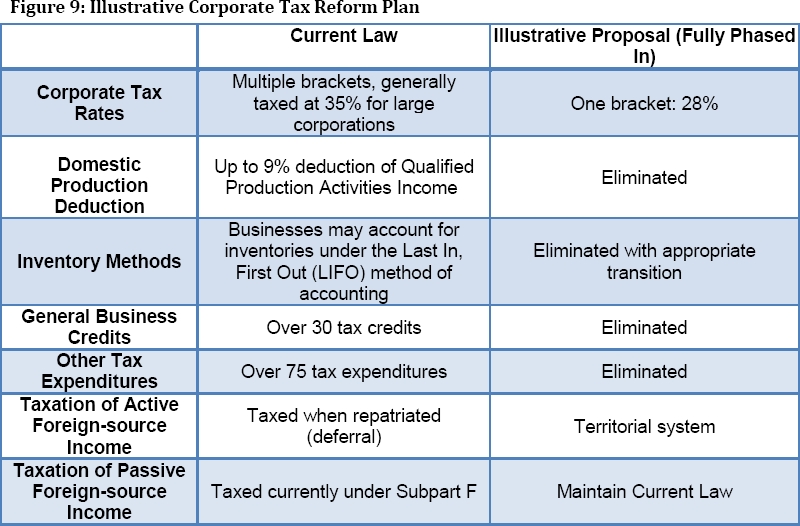 We won't presume to handicap the odds of some or all of the Commission's proposals being implemented.  Nevertheless, growing concerns about the size of the federal government's annual deficit, coupled a still-stagnant economy, seem to be pushing the discussion about tax reform from a question of "if" to questions of "when and how".