Tax practitioners have previously lacked a dedicated resource to call their own. For those intrepid souls, we offer TaxBlawg, a forum of tax talk for tax pros.

On December 9th, the IRS issued final regulations under Code section 881 that treat a disregarded entity as a person to determine whether a “financing arrangement” exists for purposes of applying the conduit financing regulations.  The finalized regulations may deny tax benefits otherwise available from U.S. tax treaties when a multi-party financing transaction is executed with a disregarded entity serving as an intermediary.

Code section 7701(l) permits the IRS to issue regulations that recharacterize a multi-party financing transaction (often referred to as a conduit financing arrangement) as a transaction directly between two parties to prevent the avoidance of U.S. taxes.  In a typical transaction targeted by this rule, a foreign parent (“FP”) located in a jurisdiction that does not have a tax treaty with the United States lends money to a foreign affiliate (“FA”) located in a jurisdiction that does have a tax treaty with the United States.  The foreign affiliate then lends money to a U.S. affiliate (“USA”) so that the payments out of the United States are subject to the (presumably low or zero) withholding tax rates of the U.S. tax treaty with FA’s jurisdiction.  The structure is shown below: 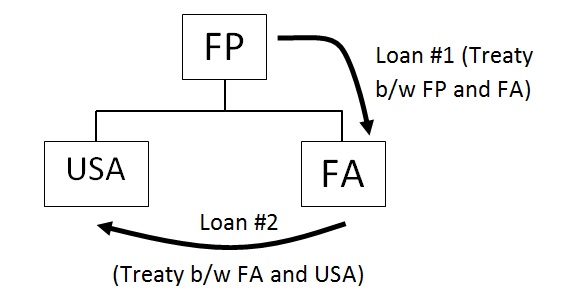 The conduit financing regulations allow the IRS to treat this back-to-back transaction as a loan directly from FP to USA so that interest payments are treated, for U.S. tax purposes, as going from USA directly to FP.  As a result, the payments do not qualify for the benefits of the FP-FA and FA-USA tax treaties, and U.S. withholding taxes may be imposed.

In some circumstances, instead of using a foreign affiliate as an intermediary for the FP-USA loan, FP might instead cause USA to establish a branch in FA’s jurisdiction (“DE”) and to treat that branch as an entity the separate existence of which is disregarded for U.S. tax purposes under the “check-the-box” regulations of Code section 7701.  Using this structure relies on a form of regulatory arbitrage whereby (i) the loan between USA and DE is not recognized for U.S. tax purposes (because DE is treated as a branch of USA), but (ii) DE is permitted to claim the benefits of its jurisdiction’s tax treaty with the United States in accordance with Code section 894.  The structure is shown below:

The finalized regulations eliminate the benefits of this alternative arrangement by treating DE as an entity for U.S. tax purposes, which causes the loan between USA and DE to be recognized as a transaction, thereby revealing the sort of back-to-back arrangement that the conduit financing regulations seek to prevent.

The finalized regulations arguably achieve the “right” result by preventing taxpayers from sidestepping the conduit financing regulations.  This, in turn, helps the United States protect the integrity of its treaty network by helping to limit the availability of treaty benefits to entities located in jurisdictions with which the United States has concluded tax treaties.

On the other hand, the conduit financing regulations might not be the ideal vehicle for addressing this perceived abuse.  The IRS already has other weapons at its disposal – such as common-law doctrines like “step transaction” – to disallow the treaty benefits of back-to-back loans.  Although the doctrine might not apply to every back-to-back loan arrangement, the doctrine’s inapplicability might indicate that an arrangement warrants being respected for federal tax purposes.  Likewise, the United States already builds into its treaties extensive “limitation on benefits” provisions that are intended to ensure that the ultimate benefits of its treaties are obtained only by residents of the countries with which such treaties have been signed.

While a belt-and-suspenders approach may give the IRS some comfort in its ability to attack such transactions, that approach raises other questions about the intersection of technical rules with common-law doctrines.  As we have discussed previously on the Blawg, after the codification of the economic substance doctrine, the “relevance” of the doctrine has become the touchstone for its applicability and, thus, for the risk of its strict-liability penalty.  Further, as I have argued elsewhere, the ability of a court to dispose of an issue on grounds other than economic substance should counsel against the “relevance” of the doctrine in such situations.