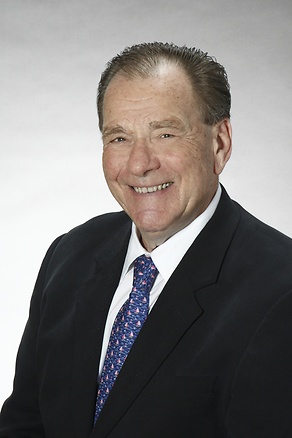 Our colleague of a half-century, George Albert Hrdlicka, passed away on the last day of 2020.  Our firm came into existence when George joined Harold A. (“Hank”) Chamberlain in January 1965.  By any reasonable measure, George was both a simple and extraordinary person.  His simplicity consisted in his sympathetic dealing with all those with whom he interacted, whether family, friends, business colleagues, clients or referral sources.  In every one of such relationships, he subordinated his own interests to those with whom he was dealing.  It was a remarkable strategy in that all of those people both admired and trusted him.  The longer they knew him, and the more frequently they interacted with him, the more it became evident that person was the real and genuine George Hrdlicka.

Born as the third child in a large working-class family with Bohemian roots (now the Czech Republic) in south Saint Louis, Missouri, George was the first in his family to acquire a college education.  His intelligence and promising future were revealed early when his teachers, without any urging or participation by his parents, skipped him through the eighth grade directly into high school from the seventh grade.  Consequently, he finished high school at 16 and completed his bachelor’s degree at Saint Louis University at 20.  That was in 1952, in the midst of the Korean conflict.

George’s older brother, Charlie, had enlisted in the U.S. Army soon after the conflict commenced in June 1950.  By the time George enlisted after completing his undergraduate studies, Charlie was already in Korea.  As he finished his basic and technical training in artillery at Fort Leonard Wood, George told his superiors that he wanted to go to Korea to join his brother in a combat unit.  They declined his attempt to volunteer and posted him at a domestic base where he completed his tour of duty as an artillery instructor.  Honorably discharged as a sergeant in 1954, he returned home and enrolled at Saint Louis University Law School.

Continuing to live with his family, where he was a hero to his younger siblings, he commuted to and completed his law studies at SLU in 1957.  He was an excellent student, finishing at the top of his class and being invited to participate in a reenactment of the infamous Dred Scott case.  He was then chosen to lay a wreath on the grave of Dred Scott to commemorate the 100th anniversary of that momentous decision.

His fine academic record and achievements at SLU Law School earned him a job offer with the U.S. Department of Justice in Washington, D.C.  In 1953, during the first Eisenhower administration, Attorney General William P. Rogers had established an “honors graduate” program as its primary mode of recruiting entry-level lawyers to the Department.  George’s early assignment was in the Civil Division where he largely performed administrative functions in coordinating with U.S. Attorneys in the field of defense and prosecution of civil actions to which the United States was a party.

Because he wanted to become a trial lawyer, George managed to work out a transfer from the Civil Division to the Tax Division in 1959.  Within a couple of years, a serendipitous event occurred that set the course of his private-practice career.  Hank Chamberlain appeared on the scene in the same Tax Division trial section in which George was serving.  Hank had completed four years with the Regional Counsel of the Internal Revenue Service first in Dallas and then in Houston.  Hank’s experience convinced him that Houston’s bustling business community was in desperate need of a new law firm that would specialize in handling tax disputes with the Internal Revenue Service.

George and Hank, then both bachelors, shared an apartment in Arlington Towers across the Potomac from the District of Columbia.  They traveled frequently in the course of trying tax cases for the United States.  George’s cases were predominantly in the mid-South while Hank worked the Texas docket.  When they were both in Washington, Hank persisted in soliciting George’s interest in going to Houston with him to establish a tax-controversy practice.

Hank left the Tax Division in mid-1963 to pursue his dream in Houston.  He opened a law office in June of that year in Houston.  He continued to press George to join him, but George was promoted to assistant chief of his trial section in the Tax Division and was not ready to make that career choice just yet.  However, by 1965 he made the choice and joined Hank in Houston.  The formation of Chamberlain & Hrdlicka was formally announced on October 1, 1965.  Although the firm now has 150 lawyers in four cities, and its formal name has changed several times during the ensuing half-century, it continues to be referred to by many of its long-time clients and friends as “Chamberlain Hrdlicka.”

Hank was a “go-getter” when it came to practice development.  George’s strategy was quite different:  His approach was to focus on excellence in his work and to treat everyone, from the most important client to the least employee, with dignity and respect.  His motto could well have been “Do the Right Thing and Good Things Will Happen,” and that’s the way his professional life actually played out over his long career.

The part of George’s character that prompted him always to put the interests of the party with whom he was dealing ahead of his own interests turned out to be a great professional strategy.  He wound up with the most loyal clients and referral sources that one could hope to have over a long professional career.  Moreover, it endeared him to his colleagues, and his judgment about both client matters and law firm matters was frequently sought and always valued.

Although George had an active and busy law practice, he made time to contribute to his professional community.  For many years he taught partnership tax law as an adjunct professor at the University of Houston Law Center.  Several of his students through the years joined Chamberlain Hrdlicka.  He appeared on numerous occasions as a presenter on tax matters at seminar and CLE-type gatherings.  For more than four decades, Chamberlain Hrdlicka has conducted for the benefit of both lawyers and accountants a full day’s tax seminar, where George led off the event with a presentation covering prominent developments (both legislative and judicial) in federal tax law over the preceding year.

George’s life away from the law firm reflected all of the same values.  His personal friendships were not transitory—they endured over many years.  He twice back-packed across the Alaskan tundra on hiking and canoeing trips with Dr. Richard Ruiz, Jimmy Carr, Bob Waters, and sometimes Dick’s and Bob’s teenage sons.  Dick, Jimmy, and George also (with the same Alaskan guide) went on a dog-sledding trip in the midst of an Alaskan winter—not the Iditarod to be sure, but rather a modest sampling of what that great race must involve.  Other trips were made to climb mountains in Ecuador and to trek up the Garhwal in India to the Himalayas and Mount Everest.  George had met Bob in 1961 in the Tax Division at Justice, and he met Dick soon after he joined Chamberlain in 1965.  He met Jimmy in the early 1970s when the four of them got together monthly for dinner at one of their residences to discuss a book they had read.  All of those friendships persisted through the rest of his life.

George was keen of wit, and he frequently expressed his humor with great subtlety.  George also was a good recreational athlete.  He played tennis well, which was his primary sporting activity, but he also enjoyed Saturday morning racquetball matches with Dr. Ruiz, mid-day “pick up” basketball games at the downtown YMCA, and took the mound as the pitcher of choice on the law firm’s softball team.  He wrote long-hand with a typical lefthander’s style, but most of his sporting activities were pursued as a right-hander.  Perhaps that ambidexterity derived from the same source as his evenly-balanced personal and professional demeanor.

George’s family life exhibited the very same personal qualities in a steadfast manner.  He and his wife, Judy, celebrated 50 years of marriage in 2014.  Their two daughters, the elder of whom has a law degree and is a financial advisor, both have families and continue to reside in Houston.

As a closing note, it should come as no surprise that helping build a substantial law firm over a 50-odd year period required that somebody have good skills in providing balance and judgment in the face of competing interests.  We can best illustrate how George provided that balance and judgment to our firm by referring to comments recently made by Secretary Henry Kissinger in the Wall Street Journal when he paid homage to the debt our country owed George Shultz for service in leading the Department of Labor, the Office of Management and Budget, the Treasury Department, and the State Department.  Secretary Kissinger concluded his remarks with these comments:

George’s outstanding attribute was his combination of wisdom and humility.  Solomon’s prayer was for “a discerning heart,” and that blessing was extended to George.  As a statesman, he would gain the whole world yet never forfeit his soul.

George Hrdlicka was the George Shultz of our law firm over the entirety of his 55-year career.