< Back to Previous Page 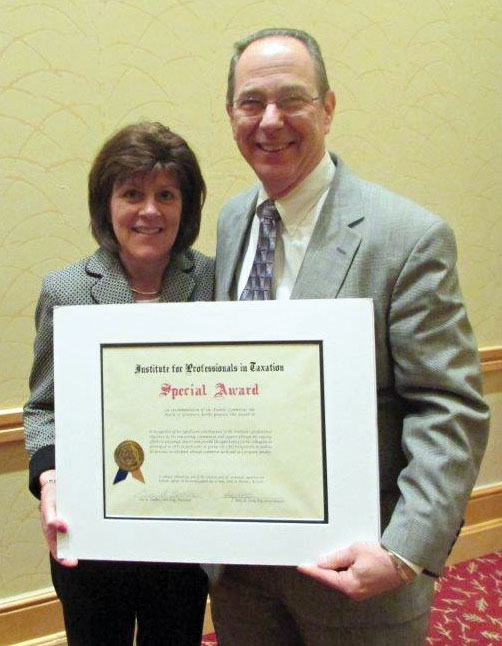 IPT President Arlene Klika presents tax attorney Stewart M. Weintraub with the Special Award from the Institute for Professionals in Taxation on July 1, 2014. The award recognizes Weintraub’s many years of leadership in service to the organization

PHILADELPHIA (July 2014) – The Philadelphia office of Chamberlain Hrdlicka is proud to announce that shareholder Stewart M. Weintraub has been recognized by the Institute for Professionals in Taxation® (IPT) with its Special Award for his dedication and service to the organization. The award was presented on July 1, 2014 at the Institute’s Annual Conference in Phoenix, Arizona.

The IPT’s Special Award is presented to members who have contributed significantly to a special project, activity, or achievement of the Institute. Weintraub was honored for his service as co-chair of numerous American Bar Association / IPT Advanced Income Tax, Property Tax and Sales/Use Tax Seminars. For years, Weintraub co-chaired each of the three individual conferences, and then became the first overall chair of the conferences, combined.

“We are grateful to Stewart for his leadership and hard work, year after year, helping to bring these seminars to fruition,” said IPT President Arlene Klika. “The co-sponsorship of these programs enhances the credibility and quality of the programs and the stature of both the ABA and IPT as providers of top-flight state and local tax education.”

In 2014, Weintraub was honored with a Lifetime Achievement award by The Legal Intelligencer, an ALM publication. Weintraub lives in Cherry Hill, N.J.