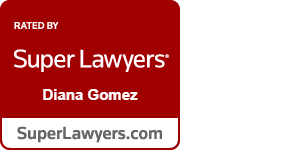 Diana Gomez is a talented trial attorney with extensive experience in civil lawsuits in state and federal courts. She focuses on complex labor and employment disputes by providing a full range of employment law services to her clients from pre-termination counseling, investigations, EEO training, handbook review, drafting of policies and employment agreements, non-competes, defense in administrative proceedings (EEOC charges, unemployment hearings) and arbitrations as well as all aspects of trial from pre-suit through appeal. Diana has successfully defended all types of employment law matters in state and federal court including claims involving non-competes, discrimination, retaliation, FLSA, and ERISA.

Diana is honored to be the President-Elect for the Houston Bar Association, which was established in 1870 and is one of the largest volunteer bars in the country with over 10,000 members.

Diana was featured in the Texas Lawyer after being recognized as one of “Houston’s 50 Most Influential Women of 2020-2021” for her legal expertise, knowledge, credibility, and trustworthiness. She was also a featured conversationalist during the 25th Annual Table Talk Luncheon hosted by the University of Houston.

Diana serves on the Board of Directors for the Houston Zoo Development Corporation and the Hispanic Bar Association of Houston. Diana is also a co-chair for District Four of the Texas Bar Foundation.

Diana has been named by U.S. News as one of the “Best Lawyers in America 2022” and has been named to the Texas Super Lawyers List consecutively every year since 2013. She is the recipient of numerous awards including the Woodrow B. Seals Outstanding Young Lawyer of Houston Award, the President’s Award by both the HBA and the Houston Hispanic Bar Association, and the Latina Lawyer under “40” Award by the Mexican American Bar Association of Texas Foundation.

Diana was also recognized as a Local Hero by the Houston Lawyer for her work as a Presidential Appointee in the U.S. Department of Education serving as Deputy Director for the White House Initiative on Educational Excellence for Hispanic Americans and then as Chief of Staff for the Office of Planning, Evaluation and Policy Development in 2008 and 2009.

Diana is happily married to Judge Michael Gomez of the 129th Civil District Court for Harris County and they are proud parents of their children.